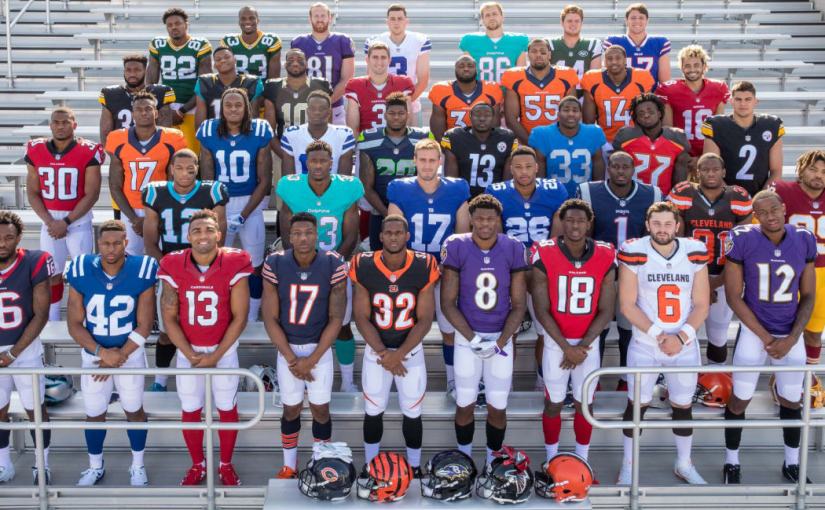 In today’s NFL, the average career length of a first-round draft selection is 9.3 years, nearly three times longer than that of an average NFL player. Naturally, expectations are high for any first-round draft selection, as teams look to find the next hall-of-famer. The first round of the 2018 NFL Draft contained a plethora of surprises. Five weeks into the season, some of the top rookies have separated themselves from the bunch, while others have under-performed their first-round status.

The biggest excitements of the 2018 Draft were the quarterbacks, but among the five first-round QBs, none of been outstanding. Darnold was a top prospect entering the NFL Draft. Many NFL analysts and experts have viewed Darnold as the most “sound” rookie QB. Josh Allen was drafted as an ongoing project rather than a polished NFL starter. He was drafted in the first round mainly due to his wildly strong throwing arm rather than his technique. Josh Rosen was drafted as the cleanest passer in the Draft. While all three quarterbacks are still getting into the rhythm of the NFL, they are yet to record good numbers. Sam Darnold, who threw an interception on his first NFL play, has recorded a poor TD-INT ratio of 7-6. Josh Allen has been terrible in the NFL so far. His completion percentage has been an atrocious 53.3%, and he thrown only two TDs in four starts. Josh Rosen has been affected by the Cardinals’ terribleness on both sides of the ball. Despite playing behind a terrible o-line, Rosen has won a game in his second start. That doesn’t excuse his 49.2% completion rate. The first overall draft pick Baker Mayfield took the League by storm in his first game. Baker Mayfield impressively led the Cleveland Browns to their first NFL win in over a year. He recorded a high 73.9% completion rate in 23 attempts. Since then, he’s thrown 3 TDs and 3 INTs.

Despite generally disappointing performances from the first-round quarterbacks, many other rookies have played well so far. On the offensive side of the ballgame, Saquon Barkley (RB, 2nd overall) and Calvin Ridley (WR, 26th overall) have shone brightly. Barkley has scored 4 rushing touchdowns and 2 receiving touchdowns in six games, while also displaying highlight-reel runs every game. Calvin Ridley has been a great #2 receiver for the Falcons. Ridley is on track to have over 60 receptions this year, not to mention the 6 TDs he has already scored for the Falcons.

Many of the defensive rookies have also played very well. Denzel Ward (CB, 4th overall), Tremaine Edmunds (LB, 16th overall), and Derwin James (S, 17th overall) have fared well so far. Denzel Ward, the star cornerback for the Browns, has wreaked havoc all over the football field. He had two interceptions in his debut against offensive powerhouse Pittsburgh Steelers. He also had a crucial forced fumble against the Jets, and without such a play, the Browns may have never come back to win. He had another INT in the Browns’ win against Baltimore. Tremaine Edmunds has also beat up NFL offenses so far, recording 38 tackles, one sack, and two forced fumbles in five weeks of football. The final standout first-rounder is Derwin James. He recorded three sacks and an interception so far. His ability to defend against top offensive teams is a positive sign for the young safety.

While some rookies have played well in an ever-growing League, others have not gotten many opportunities yet. Vita Vea (DT, 12th overall), Billy Price (C, 21st overall) and Hayden Hurst (TE, 25th overall) have experienced injuries early on in their careers and have not made impacts on the field. We are only six weeks into the season, and we are yet to see some of these future stars integrate with their teammates and get used to the hard-hitting NFL stage. There is still a lot of football to look forward to for these young first-round picks.