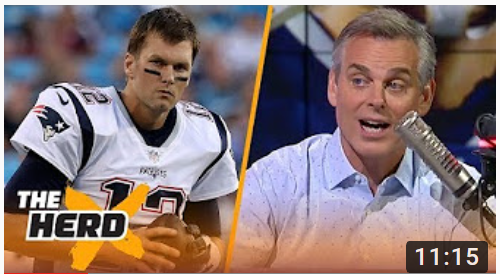 I honestly enjoy watching Colin Cowherd’s show “The Herd.” I usually like watching his NFL lists, rankings, interviews, etc. However, I disagree with Colin’s recent comments about Brady.

Well, first, I agree with one thing. Brady is being somewhat selfless by “taking pay-cuts.” Brady has shown his class by putting his team’s needs before his own contract needs. Of course, that selflessness comes with a cost; he doesn’t get to sign the HUGE money contracts that’s other QBs (Jimmy G, Derek Carr, Matthew Stafford) get to.

Now, I’m going onto what I disagree with Colin on.

Colin’s main argument is that Tom Brady doesn’t get “the reward” for taking pay-cuts. Colin argues that while QBs like Jared Goff, Eli Manning, and Jimmy G get to throw to expensive or highly-drafted skill position players, Tom Brady “has to carry the Rex Burkheads.” My question is, “SO WHAT??” Instead of throwing resources at high-profile WRs and RBs, Bellichick and the Patriots organization has built up a smoothly running system that gets WINS. Would you rather have superstars to throw to but not reach the playoffs, or play with Julian Edelman and Rex Burkhead and go to the AFC Championships 7 years in a row? I’ll gladly take Edelman and Burkhead. C’mon, Colin. The Patriots are a balanced team with no weakness, and Brady’s “reward” is a smoothly oiled team and the best head coach in the NFL. Therefore, Colin’s argument concerning the lack of reward for Brady is completely nonsensical.